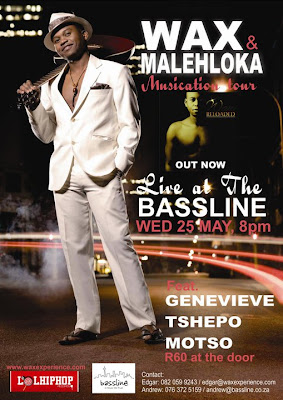 Best known for delivering some of South Africa’s hottest house hits, the Queens of SA, Malehloka and Genevieve will join Cameroonian soul singer, Wax in a live concert at the Bassline in Newtown, Johannesburg for Africa Day 2011 on May 25th.

Wax is a powerful performer who has moved listeners across the world with his sensual guitar rhythms and deep lyrics, often laced with social activism. As a recording artist and producer, he is known for his versatility between genres, ranging from R&b to house. His live performances are deeply rooted in acoustic folk. African music expert, Richard Nwamba once compared him to the all-time Cameroonian greats, opining that the country had found a youngster capable of walking into the shoes of Richard Bona or Sally Nyolo.

“I grew up listening to the music of African greats such as Salif Keita and Manu Dibango. Developing a music career in South Africa has added a new cultural element – and this brings a fresh, exciting flavor to my shows..”says Wax.

The ‘Miss Real, Mr Regular’ singer will use this concert to kick off an African tour, before travelling to Cameroon and Nigeria.

Soulistic Music’s Malehloka Hlalele, simply known as Maleh will also serenade the crowd at the concert. She has within short time, made a name for herself as one of South Africa’s most powerful voices. With hits such as ‘Uzongilinda’ and ‘Falling’, Maleh has uncovered House music’s hottest property, but also remains jazz’s best kept secret.

Guest artists include vocalist and songwriter, Genevieve who shot to fame with the hits like ‘I don’t care’, along with Motswako star, Motso.

If you are in SA…Check out Wax and his crew in concert!!