16-year old Sarah Mussango from Yaounde was last Saturday crowned winner of the first season of African reality TV show Number One Girl. She takes home 5000 dollars and a trip to South Africa, where she will star in the music video of the song Number One Girl by Wax Dey featuring Dontom. 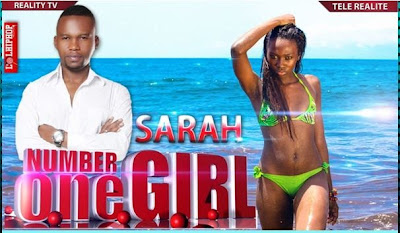 Number One Girl was conceived by South Africa-based Cameroonian artist, Wax Dey to launch his same-titled single and first urban album. 20 ladies between the ages of 16 and 30  were chosen from auditions across Cameroon. They entered into ‘the house’ at Seme Beach Hotel, where they had to co-habit and compete against each other in a series of tasks to avoid elimination.
Sarah beat co-finalist Murielle Mengong, also from Yaounde, to take pole position. She has also earned a recording deal with Lolhiphop Records, and her first single, ‘Share Your Love’ is due for release in Cameroon this week. “I’m really very excited,” Sarah said. “Things are happening so fast. I not only have the cash, I also have a single, and my first video shoot is in a few days. Wax Dey has been very understanding, and has agreed to work with me on establishing my dream, the Diamond Association, through which I want to develop the talents of young people like myself, to encourage and enable them to achieve their dreams”.
The show went beyond choosing a video girl based on her physical beauty. It set out help aspiring artistes develop their talents and self-confidence, and to ultimately create a likeable public figure with character and charisma.The song Number One Girl has also become a hit on the playlist of pan-African reality TV show, Big Brother Africa.

Thumbs up to Sandra….and to Wax, Seme Beach Hotel, Lollipop records and the Number One Girl team!!Stayed tuned for more updates..